Seismic DMT (SDMT) is the combination of the standard Flat Dilatometer (DMT) with a seismic module.

The probe is outfitted with two sensors, spaced 0.5m, for measuring the shear wave velocity Vs.

Based on previous testing experience, we prefer to use geophones as the sensors in our SDMT (instead of accelerometers) as we found this produced a better seismic signal.  Some people may argue that accelerometers provide better definition, as they do in fact sense a wide spectrum and record high frequencies, however this has nothing to do with shear wave and in fact only causes complex post-processing of the data.

From Vs, one can determine the small strain shear modulus Go.

At the moment SDMT is the only in situ test, besides the self boring pressure meter, that provides the low strain Go and the working strain M, hence two points in the G-Gamma curve.  The availability of two points helps in the choice of the proper G-Gamma curve, unlike tests determining only Go.

SDMT provides profiles of Vs in a quick, precise, simple and economical way.

An example of the results given from an SDMT is below. 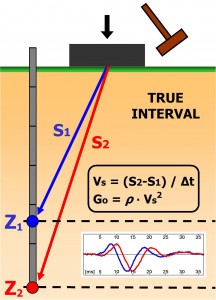